Southern California has one of the highest rates of drug offense conviction in the US. Thousands of people in San Bernardino and the other communities of southern California are arrested for drug offenses each year. Federal law enforcement agencies like the Federal Bureau of Investigation (FBI) and Drug Enforcement Agency (DEA) also conduct criminal investigations throughout the San Bernardino area on a regular basis. If you or a loved one have been arrested for any drug offense, a San Bernardino drug crimes attorney is the best asset you can have if you want a chance to avoid conviction.

Attorney Dennis Moore and the team at My SoCal Lawyers offer more than 70 combined years of professional criminal defense experience to our clients in the San Bernardino, CA area. We understand that you may feel desperate and isolated when it comes to your current drug offense case. Our team wants to help you approach the situation with confidence and fully exercise your Constitutional rights. My SoCal Lawyers can help you determine your best available defense and navigate your case with ease.

Why Do I Need a San Bernardino Drug Crime Lawyer?

Two especially important Constitutional rights come into play when a person receives any criminal charges. The first is the Fifth Amendment protection against self-incrimination. This legal protection allows you to remain silent during arrest and booking, and the police conducting your arrest should inform you that anything you say may be used against you in court. It’s vital to exercise this right, even if you have been wrongfully arrested and feel compelled to plead your case to avoid penalties. Ultimately, it is best to cooperate but remain silent until you have legal counsel on your side.

The second Constitutional right you must exercise is your Sixth Amendment right to legal counsel. Even if you cannot afford to hire a defense attorney, you still have the right to professional legal counsel and the court can appoint a public defender to handle your case.This might seem like a good option if you are concerned about the cost of hiring a private San Bernardino drug crimes attorney.

Public defenders are court-appointed attorneys that must handle multiple cases at a time. While most public defenders are capable and hardworking, they simply do not have the flexibility to offer comprehensive, individual attention to any one client. Your public defender may only be able to spend an hour or so each day working on your case. By comparison, working with private defense attorneys like those at My SoCal Lawyers offers a much higher level of defense representation. We work closely with every client we represent to provide individualized defense counsel and maintain a balanced caseload to ensure every client receives appropriate attention.

What Are the Three Basic Drug Crimes in San Bernardino?

The Criminal Code of California outlines the various drug charges that apply to the state and the penalties for each. Various aggravating factors in a case can potentially increase the penalties a defendant faces. The presence of these factors can significantly extend a sentence and the scope of the other punishments conviction will entail. The three most prosecuted drug crimes in California include:

Anyone arrested for drug charges in California should know that state drug laws conflict with federal drug laws in multiple ways. It’s possible for a suspect to face a federal drug charge and harsher penalties for federal offenses, such as drug trafficking across state lines. Drug offenses prosecuted at the state level generally entail lighter penalties, but they can still negatively impact your life for years to come if you are convicted.

Marijuana remains one of the areas where state and federal drug laws conflict. California was one of the first states to legalize medical marijuana and has recently decriminalized and regulated recreational marijuana sales for adults over 21. However, despite these laws, it is still possible to face marijuana charges in San Bernardino, CA.

It is legal for adults over 21 to purchase marijuana, but only in specific quantities from state-licensed dispensaries. It’s legal to consume marijuana and marijuana products in one’s own home, but it remains illegal to use marijuana in public, near schools, or on any government property. It’s legal for adults to cultivate their own marijuana plants at home out of view of the public, but it remains illegal to conduct private transactions to purchase or sell marijuana. It is also illegal to drive under the influence of marijuana—doing so could lead to a driving under the influence (DUI) charge and severe penalties, especially if your DUI caused injuries or related accidents.

What Can You Lose if You Are Convicted of Drug Possession in California?

California recently reduced the penalties for most drug possession charges down to the misdemeanor level. If you are charged with simple possession in San Bernardino, you likely face a maximum penalty of up to one year in county jail and a fine of up to $1,000. Possession with intent to sell could be charged as a felony if the drug involved is a certain type, possessed in large quantities, or if there are other aggravating factors in the case. For example, if you were arrested in possession of a half-ounce of narcotics, you may face a misdemeanor charge. However, if you had a kilogram of drugs and a firearm in your possession, you would likely face felony charges. Your criminal record can also influence the potential penalties for a drug offense conviction in San Bernardino.

Drug trafficking qualifies for felony prosecution in California, and a suspect charged with drug trafficking faces three to nine years in prison and fines up to $20,000. Aggravating factors such as an exceptionally large quantity of illegal drugs, the presence of firearms in the suspect’s possession, and trafficking near substance abuse treatment centers or schools can significantly increase these penalties. 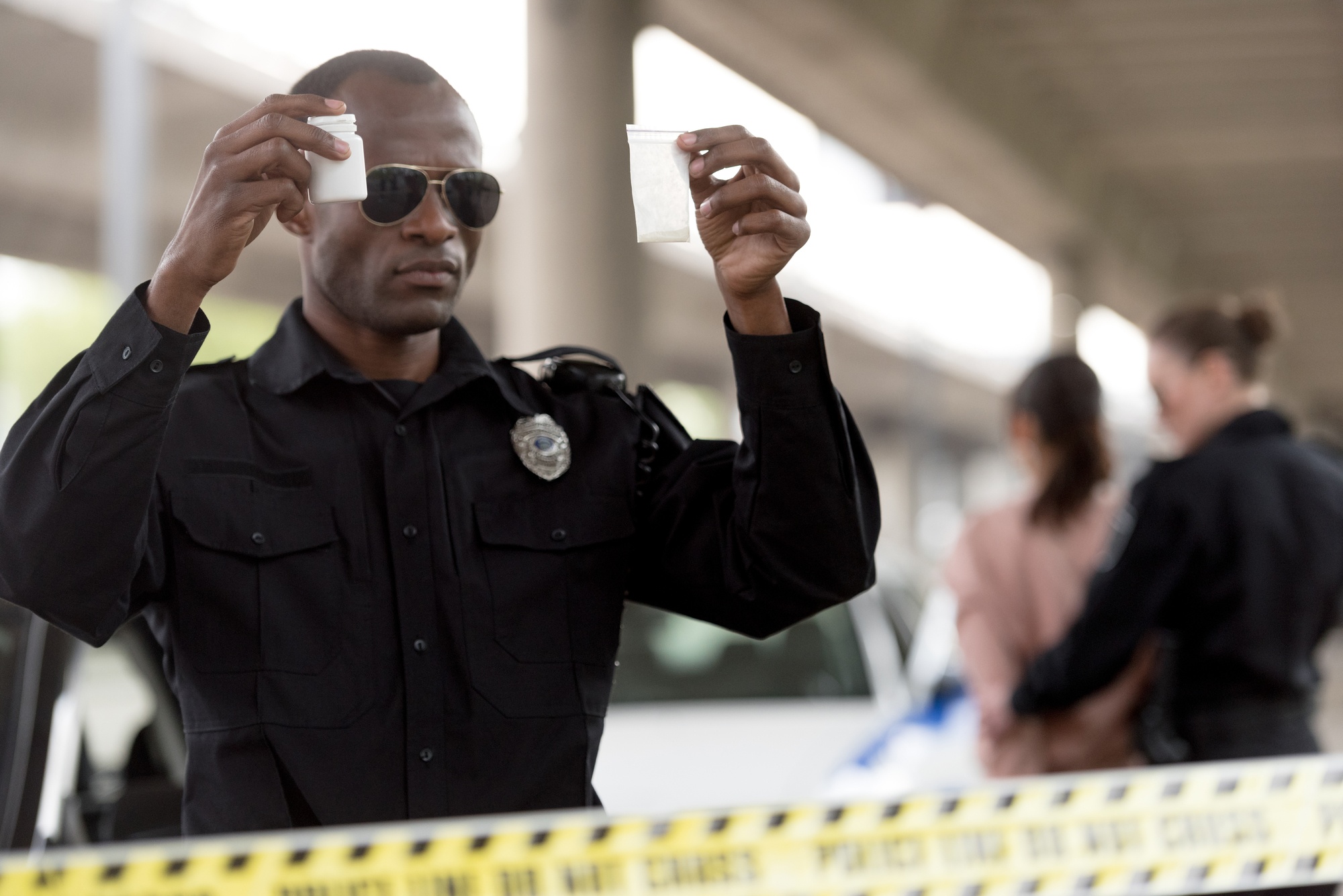 How Our Criminal Defense Attorneys Can Help With Drugs Charges

When you are charged with a misdemeanor or felony drug offense in San Bernardino, reliable defense counsel from an experienced criminal defense attorney is the most important asset you can have. Your San Bernardino drug crimes attorney can help you determine the best available defenses in your case and assist you in collecting evidence that might help you avoid conviction. Whether you are innocent and wrongfully charged or you know you made a mistake and broke the law, reliable defense counsel is essential in this demanding situation.

The laws of due process in the United States place the burden of proof on the prosecution in any criminal case. This means the defendant is innocent until proven guilty beyond a reasonable doubt, and it is up to the prosecution to offer evidence and witness testimony to meet this standard of proof. Your San Bernardino drug crimes attorney must focus on dismantling the prosecution’s case, calling their evidence’s credibility into question, and offering contradictory evidence that can help them prove your innocence.

Every drug case prosecuted in San Bernardino involves unique details—no two defendants will face the exact same situation, even if they are charged with equivalent drug offenses. If you or a loved one have been charged with any drug offense in San Bernardino, it’s vital to exercise your right to legal counsel and secure defense representation from an experienced San Bernardino drug crimes attorney. My SoCal Lawyers can provide the legal counsel you need to navigate your drug offense case with greater confidence. Contact us today to schedule a consultation with an experienced San Bernardino drug crimes attorney and learn how our law firm can empower your defense.